From early April to late October 2018, debates and participatory democracy events will take place in 27 European countries. This wide consultation seeks to restore the ties between Europe’s peoples and European integration.

Throughout Europe, there is a feeling of disconnection between the people and the decisions made in Brussels. Many express discontent or discouragement.

It is in this context that the President of the French Republic, Emmanuel Macron, proposed initiating a Citizens’ Consultations process. 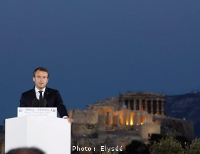 “I propose that wherever leaders choose to take this path – something I hope for most earnestly – in each of the Member States, we organize six months of democratic consultations that will be an opportunity for our peoples, throughout our countries, to discuss the Europe they want to see.”

From early April to late October 2018, in the 27 EU Member States (excluding the United Kingdom), both debates and participatory democracy events will be held. An online consultation will be set up in order to reach as many citizens as possible.

Common themes will be determined by a panel of European citizens meeting on 5 and 6 May.

These consultations will follow a few key principles common to all participating Member States: openness to all citizens, pluralism and transparency.

Hundreds of events are already being prepared in France, and the President of the Republic will take part in a first Citizens’ Consultation in Épinal on 17 April.

Overall conclusions will be presented to the Heads of State and Government ahead of the European Council meeting in December 2018.

A map of approved events can be found on the websitewww.quelleestvotreeurope.fr, along with practical kits for organizing consultations, and Background information for debates is available on the partner website Toute l’Europe.eu.