“I hear no objection in the room, I declare the Paris climate agreement adopted.” It was with these words, on Saturday, 12 December, that Laurent Fabius closed the fierce negotiations that had been underway for two weeks in Le Bourget. A long standing ovation and shouts of joy followed in the room where the 195 countries had gathered to adopt the Paris agreement, a historic agreement to combat climate change. 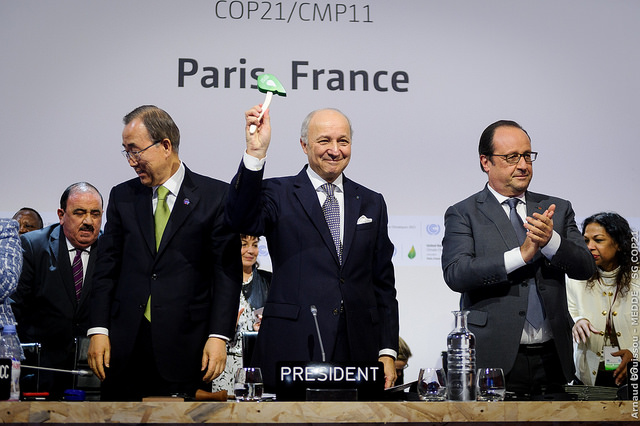 COP21: Speech by the President of the Republic, M. François Hollande at the closing of negociations

I know how tirelessly you have worked these past few months to enable us to meet here, in Paris, with the possibility of reaching an agreement.

Throughout the last few months – and even more so in the last few days – you have played a key role in bringing viewpoints together and reconciling what sometimes seemed irreconcilable. But that is the very meaning of a universal agreement.

I know that you have also made sure that the delegates could fully play their part, because you are so committed to the wonderful idea that the international community can take action.

You have worked extremely hard and I want to thank you on behalf of France for the discussions you have held here in Paris, day and night, and sometimes more night than day, to seek the agreement that had not yet been reached.

All these efforts must reach their conclusion, for what was the point of this shared time, these many initiatives, this global determination, and this work, if not to reach a universal, binding, differentiated agreement?

We are now at a critical moment, facing the only real question, which only you can answer. Do we want an agreement? This agreement which could not be reached in Copenhagen; this deadlock which, for years, was a huge disappointment for all those who wanted a future for our planet; this deadlock which called into question the ability of the international community to take action. Well, thanks to the progress that you have managed to accomplish in the last few months and especially the last few days, you and you alone have the answer!

We need to take the final step, the decisive step that will allow us to reach our goal. The text that has been prepared and submitted to you is both ambitious and realistic. It reconciles responsibility, especially that of the richest countries, with differentiation. It grants the most vulnerable and developing countries the means that have been promised. It establishes review mechanisms that are essential for the credibility of the agreement. This text will be, with your approval, the first universal agreement in the history of climate negotiations.

You are going to make a choice, a choice for your country, for your continent, but also for the world. It will be a major step for humanity. That is why, at this stage of the negotiations, at this final stage of the conference, I wanted to be here with you. For I am responsible – like you – for the mandate that was given by the 150 heads of state and government who came to the start of the conference to show their commitment to reaching an agreement in Paris. But also for the aim of keeping to the 2°C target and even striving for 1.5°C, because it is our responsibility, because it is the decisive issue, because global warming above that level could seriously affect the balance of our planet.

To achieve this, we have scheduled further meetings to review national contributions and financial commitments. As the President of COP21 said, no one will be satisfied with the agreement if everyone reads it in the light of their interests alone. But it will be a success for all, because what unites us is the planet itself.

In the face of climate change, our fates are intertwined. Each party has its constraints, as I am aware. But all that counts now is that we do the right thing together. Not all demands have been satisfied, not all claims have been met, but we will not be judged on phrases but on the text as a whole, we will not be judged on a word but on an action, not on a day but on a century. So our collective credibility and that of the international community is at stake.

Ladies and gentlemen, the presence here today of 196 delegations – representing the whole world – after so many months of work is unprecedented in the history of climate negotiations. Hopes have been raised high. The world has begun to take action, not only in this room but far beyond. Local governments, citizens, researchers and businesses have started to take immediate action. Coalitions have been formed and initiatives have been taken throughout the world; I am thinking in particular of the renewable energy initiative for Africa, led by India. I also know how much mobilization there has been with regard to carbon pricing. We are, therefore, capable of combating global warming and promoting development.

So, history is on its way, history is here, the time is right, but it will not be for much longer. We, you, are on the final rung and need to climb a little further to meet this challenge. This cannot be postponed or deferred; the time for a decisive agreement for the planet is now. It is up to you and you alone, on behalf of what you represent, all nations of the world, to make this decision.

So, ladies and gentlemen, France asks you, France begs you to adopt the first universal climate agreement in our history.